Details of Remembrance Parades in Nuneaton and Bedworth & Bedworth Armistice. 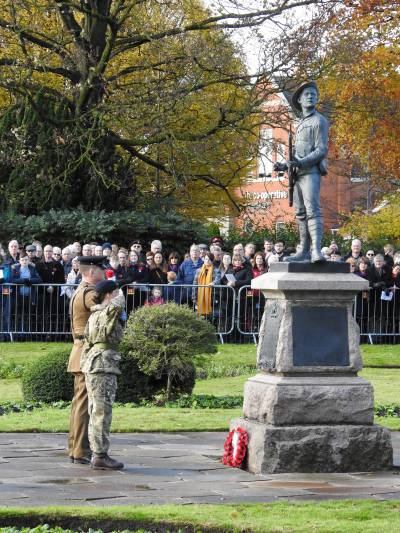 Taking place this Sunday, November 10, Nuneaton’s Remembrance will include a parade and service at the War Memorial in Riversley Park, returning to the town centre for the salute.

The Civic Party will depart from the town hall at 10.30am with representatives from the police, fire and ambulance services, plus councillors, county councillors, ex-mayors and other invited members of the community, followed closely by military and civilian groups who will depart from Nuneaton Market Place at 10.35am.

The call to worship will take place before the formal Act of Remembrance which includes exhortation, chimes, last post, 2 minute silence, Reveille and the Kohima Epitaph; followed by the laying of poppy wreaths on the Memorial.

The Bedworth Remembrance Parade on Sunday, November 10, will form up in the car park of the Ex Servicemen’s Club, just off Rye Piece Ringway and the Civic Party will assemble at the club to make their way to the Cemetery at 10.30am.  Around 10.40, the parade will march along the Rye Piece to Coventry Road Cemetery and form up ready for the service which will commence around 10.55.

After the service and the wreath laying, the parade will march to All Saints Church for ready for the start of the service around 11.40 finishing at approximately 12:30.

The parade will march into King Street, wheeling right at Corner Pin Island and out onto the Rye Piece, forming at the ex-Servicemen’s Club for dismissal around 12.45pm.

“We are looking forward to our Remembrance occasions this year. With parades in both Nuneaton and Bedworth, it’s a chance for our borough to come together to remember those who lost their lives for the sake our country.” 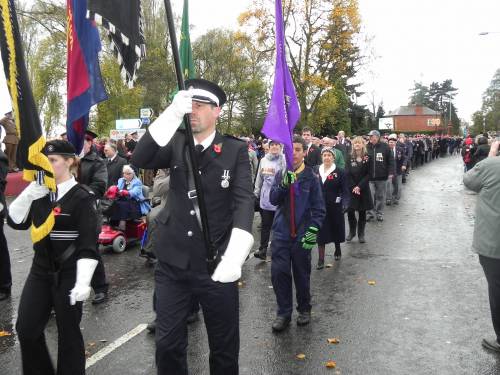 Bedworth’s proud Armistice service taking place on Monday, November 11, will see some improvements this year, with the introduction of a giant screen and speakers as well as a potential global live stream.

The giant screen will be set up next to the cemetery so that attendees will be able to get an improved view of the ceremony and with the addition of speakers the crowds should be able to hear the service much more clearly too.

One of the traditions for the Armistice service is the poppy drop that covers Bedworth with a poignant and beautiful red blanket.

There were worries that the poppy drop wouldn’t make a return this year as the plane that had traditionally been used to make the drop had been sold, however, pilot Nick Houghton and target man Simon Wilson managed to find a suitable replacement, so thankfully the drop will still be able to go ahead if weather conditions are suitable.

This year the Bedworth Armistice Parade Group would also like to live stream the parade on YouTube, which would broadcast the event to audiences across the globe. If the group’s YouTube channel reaches 1,000 subscribers, the live stream will be able to go ahead.

The service will be held at the War Memorial in Bedworth’s Coventry Road Cemetery in the presence of the Lord Lieutenant of Warwickshire representing H.M, the Queen, the Mayor of Nuneaton and Bedworth, invited dignitaries and guests, the citizens of Bedworth and the surrounding towns, and supporters from all over the country.

The parade will march through Bedworth town centre before forming up in the Cemetery for the Armistice service; after which the parade marches along the Rye Piece Ringway where the salute is taken, wheeling left at the Pin Island to re-enter the pedestrian zone before dismissing at The Alms Houses.

There are also confirmed events in Bulkington, Ash Green and Exhall.

“This is such an important time of the year as we show our respects for those who died in the First World War and in conflicts since, as well as honouring those that continue to serve our country."