This week saw Carl Harris, Corps Director for the Good Cause Phantom Knights receive his family ticket for two adults and two children for a WASPS home game 2018/19 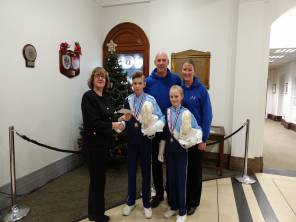 Mr Harris won the tickets in the special Borough Lottery half birthday anniversary draw in October, he said:

“As an organisation, we the Phantom Knights are delighted to be in partnership with the Borough Lottery helping to expose our organisation to the public and also the financial reward that can be achieved to help fund the band going forward for the youth of today.”

“In the 6 months that the lottery has been up and running we have seen a multitude of benefits to charities and community groups across the Borough. It is fantastic to be able to offer such wonderful prizes, thank you to WASPS Rugby Club for providing the tickets, and I hope that Mr Harris and his family have a fabulous day watching the game!”

The Phantom Knights are an American style marching Show Corps originally formed and based in Nuneaton. The main activity of the Corps is to enter marching band competitions. The Corps performs a variety of music from popular theatre shows and films through to classical orchestral pieces.

To find out more about being a member of Phantom Knights visit http://phantom-knights.org.uk/

Anyone who buys a £1 ticket can elect for 50 pence of the money to go to one of the 66 local community groups, charities and sports clubs that have signed up so far. An additional 10 pence from every ticket sold goes into the community pot – a general fund that is distributed by NBBC to other local good causes. The remaining 40 pence covers the costs of our Lottery operator Gatherwell Ltd, covers tax and goes towards the prize fund.

Entrants can either play online or call the dedicated Borough Lottery hotline on 02477 220007. Draws are made electronically at 8pm each Saturday evening with the results published on the Lottery’s website, Twitter and Facebook accounts. Winners are also informed by email.

So far, there have been winners each week, with one lucky player receiving the £2,000 prize for matching four numbers.

For more information, to buy tickets or to sign-up as a good cause, visit www.boroughlottery.co.uk