Take part in our Borough Lottery autumn draw and have the chance to WIN family tickets to a WASPS game!

To celebrate the Borough Lottery turning six months old this month, there’s a special prize on offer alongside our usual £25,000 jackpot. 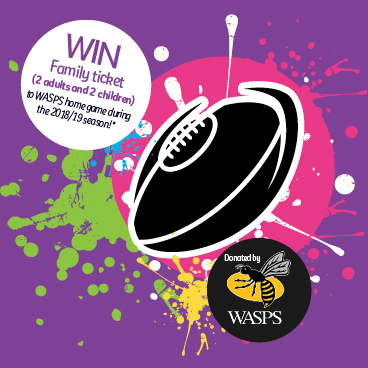 Thanks to Wasps Rugby Club, there’s the chance to win a family ticket, for two adults and two children to a home game during the 2018/19 season.

The Borough Lottery has made a real difference for charities and community groups across Nuneaton and Bedworth with 60% of Borough Lottery ticket sales going to local good causes, that’s more than double the National Lottery.

Since its launch in April this year, the Borough Lottery has raised some £13,800 for nominated good causes across the Borough, which means that it’s on course to distribute more than £31,300 directly to these voluntary and community groups in its first year of operation. In addition, it is anticipated that some £10,500 will be raised for distribution to other local good causes.

Anyone who buys a £1 ticket from www.boroughlottery.co.uk can elect for 50 pence of the money to go to one of the 62 local community groups, charities and sports clubs that have signed up so far. An additional 10 pence from every ticket sold goes into the community pot – a general fund that is distributed by NBBC to other local good causes. The remaining 40 pence covers the costs of our Lottery operator Gatherwell Ltd, covers tax and goes towards the prize fund.

Entrants can either play online or call the dedicated Borough Lottery hotline on 02477 220007. Draws are made electronically at 8pm each Saturday evening with the results published on the Lottery’s website, Twitter and Facebook accounts. Winners are also informed by email.

So far, there have been winners each week, with one lucky player receiving the £2,000 prize for matching four numbers.

“We’ve been very pleased with the response to the Borough Lottery – it’s a great way for voluntary groups across the Borough to generate a regular income while offering their members and supporters a chance to win prizes.

“The Wasps tickets on offer this time will create a special buzz and we’re hoping for record ticket sales. I hope to see even more people getting on board to boost this very worthwhile lottery.”

“Speaking as one of the beneficiaries of the Borough Lottery, it is fantastic to see it going from strength to strength. A big thank you goes out to everyone who has bought tickets and continues to support local good causes such as ours.”

For more information, to buy tickets or to sign-up as a good cause, visit www.boroughlottery.co.uk