The Borough has a new Mayor

Cllr Bill Hancox has been appointed as the new Mayor of Nuneaton and Bedworth for 2017-2018. 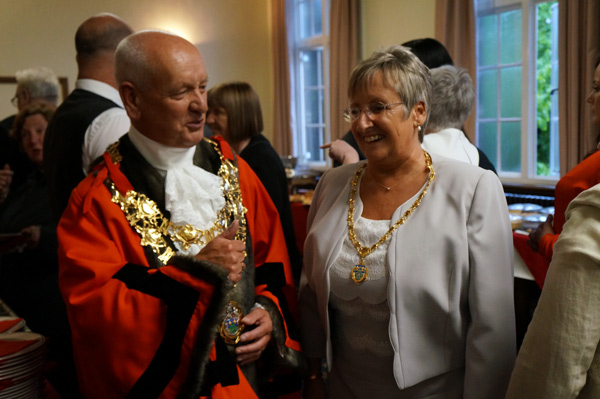 He was officially installed at the annual Mayor Making ceremony held at the Town Hall (this evening) and takes over from Cllr Jill Sheppard, who held the position since May 2016.

Also at the ceremony, Cllr Chris Watkins was installed as Deputy Mayor for the Borough, taking over from Cllr Hancox.

The ceremony took place in the presence of Full Council, invited guests and Alan Franks, Managing Director of Nuneaton and Bedworth Borough Council.

It is the second time that Cllr Hancox has held the prestigious post, having previously been Mayor in 2001-2002.

"It is a great honour to be Mayor of the Borough of Nuneaton and Bedworth and I am thoroughly looking forward to representing the Borough over the next 12 months. One of the highlights of being Mayor is attending all of the many events associated with the position and meeting so many wonderful people of all ages living in our Borough and it is a challenge that I will endeavour to meet with great pleasure."

During his year in office he will be supported by Mayoress Sheila Hancox, with the couple having recently celebrated their ruby wedding anniversary.

Cllr Hancox was originally elected to the council in 1990, and represents Bede Ward in Bedworth. He and Sheila have two daughters and five grandchildren.

He started his working life as an apprentice glazier in 1968, before qualifying in 1973, later working for the Probation Service before retiring in 2013, his hobbies include gardening and crown green bowls.

Cllr Hancox is also a Freeman of the Ciy of Coventry and a member of the City’s Freeman’s Guild.