During a full council meeting yesterday evening, Nuneaton and Bedworth Borough Council awarded Civic Honours to five former councillors who have provided outstanding service to our Borough and two exceptional community figures, all of whom have made a difference to the life of our towns.

The nominations were formalised during the meeting and the Mayor of Nuneaton and Bedworth presented a medal and certificate to each.

The five former councillors were bestowed the highest award a council can give to a past councillor, that of Honorary Alderman/Alderwoman. These are individuals, who in the opinion of the councillors have made a significant contribution to the wellbeing of the citizens of the borough and had upheld the ideals of the council.  They were: David Carr, Gerald Smith, Don Jacques BEM, Diana Hawkes and Alan Farnell.

The role of an Honorary Alderman/Alderwoman is to support the Mayor and the civic side of the council, to assist new councillors in settling in to their roles within local government and to give advice if required. They can, if necessary, represent the council at functions.

This is the highest award a council can give to a citizen of the borough.  It is given to an individual who has given exceptional service to the borough and its communities over a long period of time or someone who has brought renown and great kudos to the borough.

Having spent an incredible 39 years as the fundraising coordinator at George Eliot Hospital Mrs Whittaker went on to become charity funding co-ordinator for the whole of the Trust. Jean’s enthusiasm and devotion helped raise over £1 million for the hospital to buy vital equipment for the care and treatment of its patients.

Om Gurung, MBE is a former Gurkha sergeant major who has become a key figure in the borough. Championing the Nepalese community, Mr Gurung is chairman of the British Gurkha Veterans Association, through which he has overseen the creation of the unique Gurkha memorial in Riversley Park.

A dedicated supporter of the Royal British Legion's Poppy Appeal and Nuneaton and Bedworth's Mayoral Appeals, Mr Gurung was also instrumental in the creation of the UK's first Gurkha pub, which acts as a base for members of the Nepalese community.

“We wish to restore civic pride in the borough. Those who have made a contribution to our community should be rewarded for their efforts, and this is the start of our efforts to reward people who have served Nuneaton and Bedworth with distinction.

“It is not just about the Aldermen and Freemen of the Borough. We are also working on a permanent solution to rewarding those of our community who make a difference. A policy is being worked up for a permanent community award system, called the Nuneaton and Bedworth Award of Merit.” 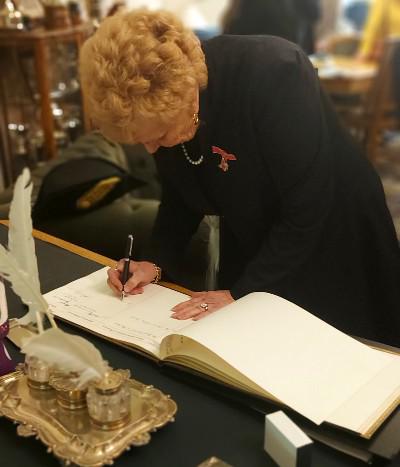